Finally it arrived, the big one, the national 24hour champs.

After a mad panic since my return from Spain trying to rebuild my bikes, not helped by all the bank holidays, I finally sorted everything in time to leave for Newcastleton on the Thursday before the race. We stayed in the fantastic Grapes Hotel in the days leading up to the race and this enabled me to fully relax and mentally prepare for the battle ahead. This was a far better option than a damp tent the night before the race, and the food is fantastic aswell although it took lots of willpower to avoid a nice beer the day before the race.

The weather leading up to the race was far from perfect. Plenty of rain fell overnight however the course drained well. Come morning of the race the sun was out again and the track riding fast. I was feeling fresh and confident and eager to get underway. 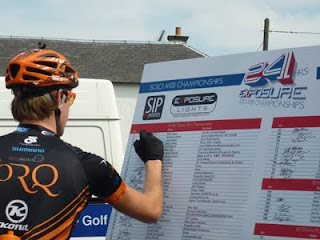 At 11:30 we all assembled in the town square in Newcastleton and waited to be called up to the start line. After last years result I was ranked number 3. Once again we were escorted out of town by the local piper before the race started for real. The neutral section was very nervous. I could tell right away that the pace wouldn't be as pedestrian as it was last year and that i wouldn't be riding away from the field on the first lap again!

My game plan was simple, follow Matt Page or Ant White, I knew these were the guys to beat. From the off the pace was rapid and Matt and myself formed a small gap over the rest of the favorites along with Simon Earnest who was riding the 12h race. We were working well together trying to force a gap when Simon crashed on a gravel corner. Matt then rode over him and had to stop for a few seconds. This allowed Ant, Rich Rothwell and Dave Powell to catch up leaving a group of 5 at the front. The pace was still high although we seemed to be working fairly well together, the race was neutralized for now. About half way into the 2nd lap Matt punctured and there was a comical moment when the rest of us looked at each other then rode flat out to take advantage!

Rich was in a determined mood and was smashing it at the front of the group. This carried on for 2 laps, Dave Powell was dropped after the first hot lap and Ant and I were hanging at the end of it. Matt caught us up again though and immediately attacked. This was the catalyst for the splits to begin. I dropped Rich and Ant and began to close down on Matt. 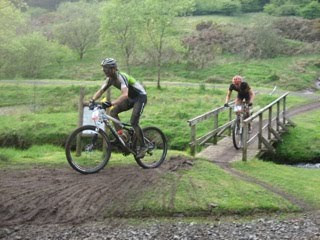 This was roughly 6hours into the race and little did i know that it was a key moment. Entering the first descent I could see Matt about 20seconds ahead. I was pushing hard hoping to close the gap and work together. On the descent I caught and passed a number of back markers. I then was stuck behind another and called to pass but he didn't appear to hear me. Then suddenly he moved aside and in my haste to catch Matt I dived past. The next thing I knew I was somersaulting through the air and landed in a heap. As I passed the rider his rear wheel skipped out which hit my rear wheel sending me over the bars. It could have been over there and then. I was pretty shocked so the only word that came to my mouth began with an 'F', so apologise to the poor bloke who was on the receiving end!

The crash to away a bit of my impetus and Ant caught up with me again although we were still less than a minute behind Matt. We rode together for a few more laps untill I started to drop off a little bit. I was starting to ache i bit from when i flipped onto my back in the crash but nothing too bad.

As darkness came so did the rain. There was a massive downpour which totally soaked me at the start of the lap. I then got quite cold which started to make my back ache from the knock in the crash. I slowed a little but made it back to the pits after a dark patch, I was close to quitting cycling, hating bikes, the usual bat patch thoughts. Once i made it to the pits though I was able to eat some food, change my clothes and suddenly I warmed up and felt great again. I then began to smash it! 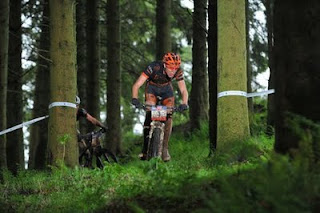 I was feeling super strong and as soon as i was warm my back pain disappeared. Over the next few laps a gradually began to bring back time on the guys in front. It was still raining but i was feeling great and still had plenty of power in the legs.

Just before dawn it rained really hard again and the wind picked up. I was still in a comfortable 3rd position but the cold gradually began to get to me. The same happened again, as soon as began to get colder my back seized up. This time however it locked solid and the power in my legs just vanished. My lap time was half an hour slower and I only made it round with the help of Rob Dean.

Once in the pit I had to be prized off the bike. My back was in spasm and I was frozen to the core. I had to see Sabrine, the physio, and it took an hour to loosen up my back enough for me to be able to move about again. By this time I had slumped down to 7th position 15 minutes behind 5th. The podium was out of reach now and the weather had worsened.

If i am totally honest I really didn't want to get back on my bike to chase for 5th position. I decided not to go out again. It very frustrating that my race was affected by someone else's mistake, but at the end of the day I guess that's just racing.

There are plenty of positives to take away from the experience and also plenty of lesson learnt. Hopefully these will make me a stronger rider in future 24hour races.

One thing is certain though, I want the national title more than ever now!
Posted by About Josh at 16:33

Sorry to hear about that bad luck Josh. Get 'em next year for sure!