With just over a week to the first big race of the year so I thought it’s probably time for an update!

Next week I fly off to Spain for 2 weeks. The first half is a holiday; the second is the 6 day Andalucía Bike race. Andalucía is the first target of the year and I will be racing in a pair alongside Juice Lubes team mate James Porter. I’ve ridden this race for the past 2 years and it takes in some great trails around Cordoba and Jaen, 2 historic towns in Southern Spain. It’s a UCI race which attracts a world class field and makes for some tough early season racing. The aim isn’t to win, but have some fun, ride some great trails and maybe keep up with the worlds best for 10 minutes!

My fitness is progressing quite nicely too. Mark, my new coach at FTP training has totally changed the way ride train. No stupidly big rides with the following exhaustion and normally illness, instead just nice consistent training with specific efforts. Some weeks I’ve felt as though I’m not training hard enough but it soon catches up and the recovery days come at just the time. There was a small blip at the Brass Monkeys in January where I just couldn’t keep up, but I just put it down to still being unfit and a bit tired from training. The past few weeks I’ve started to feel pretty strong though so hopefully it bodes well for the fast approaching season. 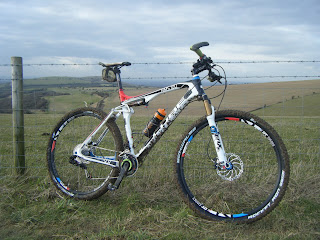 The most exciting recent news is the appearance of my new team bike. This season the Juice Lubes team are supported by Cube bikes. I am riding the full suspension AMS 100 and was pleasantly surprised when I unpackaged it last Friday. It weighed in at 10.9kg for a 23” frame, that’s the same weight as my hard tail from last year! I changed the finishing kit and wheels to USE’s latest carbon offerings and fitted my power meter so all in all pretty pimp bike. I just can’t wait to go riding in those sunny Spanish mountains now! 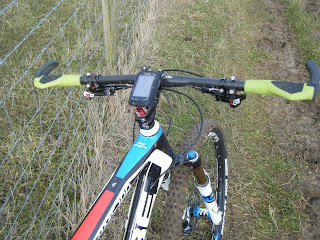 First impressions are good. The frame is super stiff. In actual fact I'd say this is the stiffest bike I've ever ridden, all the force I put through the pedals seems to push me forwards. The wide down tube must contribute to this and also doubles up as a handy mud guard! I love the fact that I can run 2 750ml water bottles inside the main triangle, very few full suss frames have this which is a huge bonus for the type of riding I do. I've not had a chance to try it on super technical trails yet but i'm sure that this will be remedied in those Spanish mountains. The twisty single track of Stanmar park was eaten up with ease though, this bike flies! 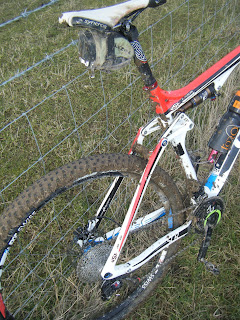 Now time to box it up and pack my bags ready for the 4am Gatwick express train on Monday morning!