Today was the first stage of the Andalucia Bike race in Spain. I'm teaming up with Juice Lubes team mate James Porter for the 6 day race.

Today's stage was around the city of Cordoba. After the usual chaotic neutral zone we settled into our own rhythm on the first climb of the day. We were probably a bit too far back after the neutral zone but picked up places all the way up the climb. Things were going well and we were moving through the groups making sure to ride within our capabilities. 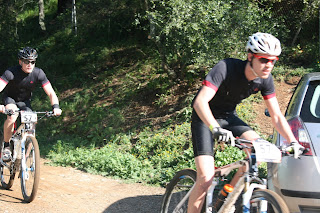 Things began to go wrong at the foot of the first descent. I suffered a rear puncture and lost a few minutes fixing it. We lost the groups and set off again at our own tempo. We began moving up the field constantly, making to we enjoyed the trails. My gears were playing up a little but a few tweeks of the adjuster seemed to solve it, i put it down to the trails conditions affecting shifting.

We rode well together as a team. James is the stronger rider,he draws away on the steeper climbs but we always re group and hit the descents fast. My gears began playing up again in the latter stages of the race, then about 15km to go the chain jumped off the back of the cassette appearing to bend the hanger. From here we had to limp home as I was trying not to change gear too often and totally snap the hanger. Although we didn't get caught by any riders, we lost a fair bit of time and we are both confident that we would have ridden very strongly to the finish. 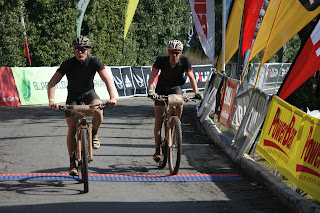 On closer inspection at the finish it appeared that the hanger was not bent. The problem was more user error! The Cube frame has a 12mm thru axle. When I changed my puncture I managed to get mud in the thread which prevented the axle threading into place. I rode most of the stage with my rear wheel not properly attached! With 15km to go the small hanger bolt snapped effectively letting the mech float around on the axle, hence the bad gears. lesson learnt. 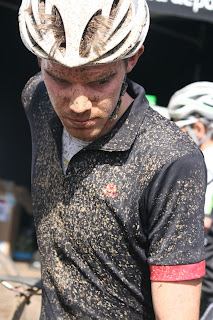 We placed 62nd on the stage 45mins down on the winners. Both of us are confident that we will move up as the week progresses although the strength in depth of the race this year is incredible! Last year the equivalent performance would probably have been top 40!