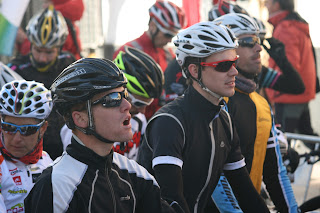 Everyone was suffering today when we huddled together at the start in a howling gale and 4 degrees. At this stage in the race everyone is nailed. Today's stage was a climb fest mainly based on fire roads for the first part due to snow on the higher tracks. The first climb of the day was nice and steep and we gradually chugged along and settled into a little group. As the climb progressed we drew away as we rode tempo. A fast fire road decent followed and part of the group reformed as we passed through the feed zone before once again kicking another mountain! 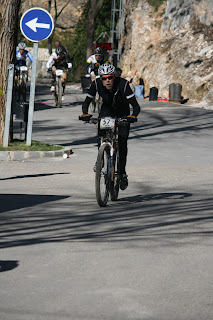 This time we rode up into the snow line and once again swapped a few places with other riders before smashing down yet another fire road/tarmac descent.

Once we reached the feed zone at the bottom we pretty much turned left and ride straight back up the mountain!!! This fire road was a bit muddier and went a bit higher than the last. The last few k were a bit slippery and I managed to miss the fact that I was running low on energy. After going a bit cross eyed I managed to take a Torq gel and half a bottle of Torq energy drink and save the day. 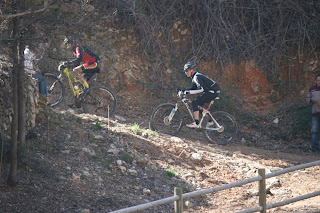 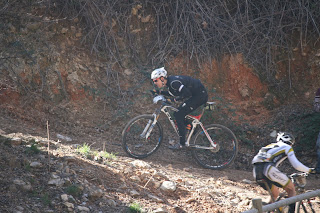 From here on there was some great single track and James took great pride in smashing past some poor Spaniards. I tried to keep up the best I could but was on the limit of running out of energy all day so had to settle for staying on the track and not crashing!
With 10km to go things started to get a bit wobbly again. Thankfully I filled up my bottle with Coke at the last feed which pretty much saved me. The stage finished with a nice 3km steep loose climb which I managed to drag my self up. The fast fire road descent to the finish was a bit loose and sketchy but some how I got down in one piece and was just behind James at the finish.

We placed 44th on the stage which is pleasing, we're slowly getting there!
I do have some photos but its a good 2 minute back to the room to get the camera and I'm knackered so they'll have to wait! hopefully this made sense, my brain isn't fully functional right now...
Posted by About Josh at 19:28