Day 3,time for some bigger hills! Today's stage was based in Priego de Cordoba, a small town nestled in rolling hills.
The big bonus today was the lack of crazy neutral zone around town. The race kicked off right away up a short sharp climb before quickly descending and winding along a valley. Groups soon formed and we settled into the wheels saving energy. Over the first big climb we lost no time and fired out of the bottom at the head of the group we were in. On the long fire road climb that followed we settled into a good tempo and gradually drew away. Over the top of the climb the course got a bit boggy and was frozen in the shade!

This made the following descent pretty interesting on summer tyres but great fun, although some slow descending Europeans did prove a tad annoying to pass!
Once we hit the valley floor there was only one way to go.... up! 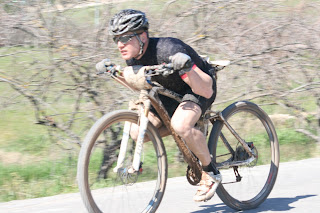 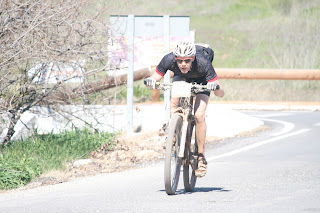 The next climb was mainly tarmac and once again we settled into our rhythm. I struggled a bit near the top but a few Torq gel proved a suitable remedy. The descent that followed was great fun and we closed the gap on riders ahead, a few missing course marked led us astray for a few minutes. Unfortunately just as we fired out the bottom of the descent James picked up a rear puncture. All our good work was undone as we stood at the side of the road for a few minutes fixing the damage.

Once the tyre was fixed we jumped onto the wheels of a passing team. This proved to be a good move as we saved lots of energy on the long dragging climb that followed and managed to catch up a few of the places we lost. We continued to ride strongly to the finish eventually placing 49th, our highest finish so far. 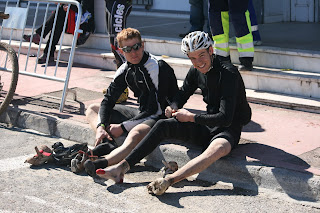 The next few days are pretty tough as we move into the real mountains and the weather is due to turn bad on thursday. Hopefully we can carry on the way we are and gradually move up the field.
Posted by About Josh at 19:31